We’re getting to know a little bit about Ravinder and her novel through a short Q&A. 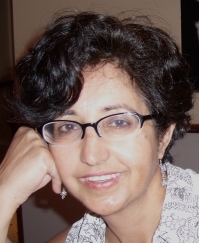 Before writing A Wicked Old Woman, did you do a lot of research for the novel to make sure that it felt authentic?

A Wicked Old Woman, has been called ‘the first intrinsically British-Asian novel’ (Home Truths, by Professor S. Nasta). More than any of my other novels, A Wicked Old Woman is reflective of the period in which I lived, the ideas and the background I came from, but through the imaginative lens of fiction, which turns it into something universal, something to which people can connect on an emotional level, and something which I hope is entertaining, comedic and intelligent.
I didn’t need to do any research, as there was so much stuff already whizzing round my head, wanting attention. Writing is as much a way of making sense of the world we live in, as examining it. There are so many layers to fiction.
The decades the novel covers were exciting and innovative with old ideas being questioned and new ideas, such as feminism, gaining momentum and power. Those from migrant backgrounds were looking backwards and forwards, trying to work out who and what they were. Precisely what is happening now. 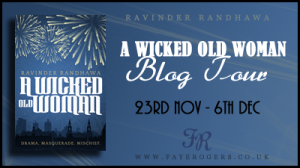 Kulwant is a very vibrant character, does she have any qualities taken from people you know?

I do think she emerges from my Punjabi, Indian background, and of course from the women in my family. Punjabi women are known for being strong, down-to-earth and straight talking. Mess with them at your peril.
Equally, they cover the human range of sensitivity, emotion, desire, love and rebellion. Kulwant is a fusion character, entirely her and yet infused with the energy and passion of many others. Must say, I really love her.

There are often many edits to books before they’re published, how much did A Wicked Old Woman change during this process?

I believe I did about three or four edits. These days I do far more, it seems the more you write, the more critical you become of your own work. In A Wicked Old Woman repetitions needed to be cut; events, dialogue and ideas needed to be properly developed. It’s a story with many characters; to me it really feels like a bustling British city in itself, where all sorts of people bump into each other, where the most unlikely friendships are forged, and where lives do collide and mesh with those of others. The characters start off at different points, but they’re all moving towards the same point, all converging around Rani/Rosalind, who has to be saved from herself.

Many writers take a while to find their feet when it comes to writing novels, how many have you written in total (including any that are unpublished, and may stay that way!)?

That’s so true. I was always scribbling, writing bits and abandoning them; writing fan fiction and abandoning it; starting novels and abandoning them, experimenting with different forms, such as poetry, screenwriting and playwriting, or doing non-fiction articles.
However, I’ve been lucky that all the novels I’ve written so far have been published, but that’s no guarantee for the future. Writing is a process in itself, I don’t feel anything is wasted. Just because something doesn’t get published doesn’t mean it wasn’t an important stepping-stone.

When you’re not typing away at the keyboard coming up with new ideas, what do you do?

The same as everyone else I should think: being with the family, watching t.v., trying to catch up with the Sunday papers. Seeing friends for a chat and a cup of coffee – or glass of wine. That’s even better! Seeing films and plays. I’m still blissed out from watching Benedict Cumberbatch in Hamlet. Like thousands of others, we didn’t manage to get tickets for the theatre, so went to the live screening instead, which was a fantastic way of seeing it too. That was the first time I felt I really understood Hamlet’s pain and anguish, his dilemma and doubts about revenge and violence. Exactly the inner struggle we’re all going through now, given what’s happening in the world.