Today I have to pleasure to welcome Nick Ostler and Mark Huckerby for the second time on Chouett, this time with guest post from Nick where he is on a quest to discover how closely his ancestry is related to those of Vikings! Who knows, Nick might be closer to Norse divinity than we think ;). 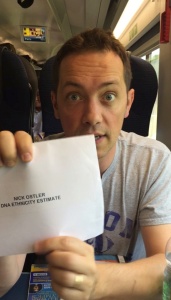 Vikings In The Blood By Nick Ostler

I’ve always felt pretty at ease with my chronic Englishness. Give me warm beer, wet summers, cricket on the village green to the jangling of Morris dancers’ shin-bells and I’m a content chap. I’ve even stuck with tea all these years, while everyone else seems to have been seduced by some revolting, bitter bean-juice called ‘coffee’. So “pip pip, tally ho and chocks away!” But what if I’m not completely English after all? Nobody is of course, not one hundred percent. As early as 1701, Daniel Defoe was ridiculing the fallacy of English racial purity in his satire ‘The True-Born Englishman’. To be English, he wrote, is to be “derived from all the nations under heaven… Romans, Danes, Saxons, and Normans…” As Mark and I embarked on writing our second book in the Defender of the Realm series, what I was really burning to know more about was the ‘Dane’ part. Could it be that I wasn’t English at all, but in fact a Viking?

The image of the shaggy-haired, axe-wielding savages from Scandinavia who terrorized much of Europe from the late 8th to the 11th Century has undergone something of a rehabilitation in recent years. We now know that Vikings were much more than hit-and-run raiders. They were traders, farmers and settlers as much as they were seafaring warriors. In England the ‘Danelaw’ saw great swathes of the country live under Viking rule and later the English throne itself was for a time occupied by Scandinavian kings, the famously tide-bothering Cnut and his sons. Our Viking neighbours left their mark in the form of place names – for example, ‘thorp’ is Old Norse for ‘hamlet’ – as well as in the architecture and layout of great cities like York (‘Jorvik’ as it was to them). But perhaps their greatest legacy was, until quite recently, a hidden one. Our DNA.

It stands to reason that as long-term guests on our shores, the Vikings would have left behind many descendants, but until a few years ago we did not know to what extent. Geneticists compared the Y chromosome markers – DNA passed from father to son – of thousands of British men to DNA patterns associated with the Norse Vikings. The results were astounding – extrapolating from the evidence, the scientists concluded that almost a million people in the U.K. could claim direct descent from the Vikings. The further north you live, the more likely you are to carry the genes – one in three Shetland Islanders are of Viking stock.

This was a mind-blowing discovery – a ‘sleeper cell’ of a million Vikings living among us all – just the sort of thing we could imagine our arch-villain and ‘alternative archaeologist, Professor Lock, taking advantage of – which he does in Defender of the Realm: Dark Age to rather devastating effect. But what about me? Could I feel the heart of a Norse warrior beating beneath the chest of an Englishman who doesn’t like swimming and is not even that keen on contact sports? I mean, the brilliant Cressida Cowell has shown us with Hiccup that Vikings can be the thoughtful sensitive type too, so why not me? Plus I’ve been to Norway THREE times and loved it, I’ve watched every Scandi-Drama going AND we’ve been hired to adapt THE MOOMINS for television. Maybe none of this was a coincidence? There was only one way to be sure. Thinking my most savage Viking thoughts, I spat my saliva sample into the test tube provided by Ancestry.com and sent it off. Six weeks later, the results of my genetic Eurovision, were in:

Ireland – 7% (our old editor would be SO pleased!)

Six percent! Not exactly overwhelming and hardly evidence of a strong Viking connection, but it was a start. I threw myself into writing the Norway-set chapters with renewed vigour and a sense of national pride. I was coming home to the fjords! But what about Mark? Would he turn out to be 99% Viking and quit writing to build longboats and raid the Lindisfarne National Trust gift shop? Only time will tell, but he’s confident. After all, he has something I don’t. A beard.

Defender of the Realm: Dark Age by Mark Huckerby and Nick Ostler published by Scholastic is out now.