I am delighted to welcome you all on the last stop for the Blog Tour of “The Hive Construct”, debut novel of Alexander Maskill.

Alexander has kindly accepted to let in us in a little so we get to know the author behind the novel and what made it come to light, by answering a few questions.

My interest in politics was a major driving force behind the novel. Thematically – for me, at least – it’s about political systems and about the limitations they impress upon their participants; that’s all stuff that came from my engaging in politics. On that level, the entire book was about illustrating those kinds of political clashes.

My interest in computer sciences mostly came about as a result of writing the novel; I was pretty computer literate relative to normal people, but I was in that weird place where I knew just enough that I realised I knew next to nothing. I learned programming for the novel, and it was only after doing so that I realised this interest was something I could pursue further. The issue now is that I’m at the tail end of a degree on the subject and I’ve realised exactly how much nonsense I was talking!

I don’t know if it’s even a warning so much as a fairly fatalist extrapolation of the way technology amplifies the cultural, political and sociological issues we had to begin with. Calling the things we invent the problem is an abdication of responsibility. We made the technology, we control the technology, and then we blame the technology for our behaviour. At its very worst, certain systems suit certain negative behaviours more than they suit the positive ones, but even then, a human decision to participate in those negative behaviours was the root cause. At most, technology broadens the range of these activities, but it’s still a symptom of a larger problem that exists within the way we are.

Expect interesting characters, political intrigue, expansive and nuanced world-building, a fair smattering of action and a bunch of other fun things. I think. I mean, I’ve never not been its author, so I have no idea what this novel is like for anyone who isn’t that. People tell me they liked it, and I believe them!

I’m a voracious learner. I’m constantly scouring the internet for new online university courses and such. The internet presents an incredible resource for broadening our horizons, and not taking it just seems silly. I learn about things, I learn to make things; this stuff is out there for anyone to participate in. I’m also a major media soak in general: I watch films, I play video games, and I listen to and write all sorts of music. It all informs my creative output.

Depending on the stage in my life, Goosebumps: The Abominiable Snowman Of Pasadena by R.L. Stine, Lord Loss by Darren Shan and, by my teen years, Battle Royale by Koushun Takami. 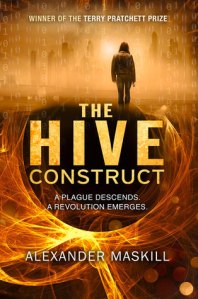