So today I have a guest post from authors Mark Huckerby and Nick Ostler who have just had their first book of the “Defender Of The Realm” series released. 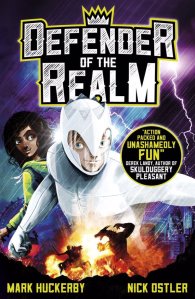 I was absolutely intrigued by the blurb as I attempted to imagine Prince William and Prince Harry as superheroes, with having to deal with their royal duties by day and having this secret identity by night.
I actually thought, that would be pretty cool.
Although this might not be possible in reality, at least Mark and Nick have provided us with a vehicle in their novel to let our imagination run wild with possibilities.
I hope you will enjoy this post which delves into the “How different of a hero” the main character is.

Also take the time to hop on the other stops of the tour!

How is Alfie different to other superheroes?

His alter-ego is world famous! Most superheroes have a very low key cover story – Superman’s Clark Kent is a lowly reporter, Spiderman’s Peter Parker is a normal high school

kid. That’s not an option for Alfie. He is King of the United Kingdom and his entire life has been lived in the public eye. Which can make his other job – being the Defender and saving the nation from disaster – pretty tough sometimes.

He has unique powers – the Defender’s powers are firmly linked with the Crown Jewels and his position as monarch. Only he can wield the regalia as super-weapons and only he has the power to ‘command’ anything borne of British soil. It gives him a big advantage when he’s at home, but can be a serious disadvantage when he’s abroad (as he’ll learn in Book 2..!).

He is only fourteen – not many superheroes are also still teenagers. So as well as being the Defender AND the King, Alfie also has to struggle with the everyday problems of a fourteen year old boy – school bullies, fights with his siblings, rows with his parents, how to talk to girls!