Surely, they are some of us out there who have experience it!

The overwhelming feeling born out of a situation so distressing, that you would wish the earth to open up and swallow you whole… and you can just simply disappear…

From those of us who have encountered very amusing and embarrassing moments who wish it to happen, to those who unfortunately have been afflicted with pain, a pain so unbearable that they might just literally take that step.

Catherine Johnson’s piece is the retelling of Mary Willcocks’s (aka Princess Caraboo) true story. Yes, this lady was real and was exposed as one of the most successful imposters of her time. It is not hard to imagine that her story would have fascinated many and here Catherine gives us the opportunity to take a peek at her life…and maybe make a better one?! 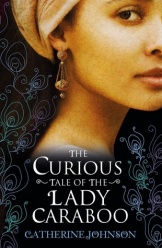 Oh, how this Mary suffered…This Mary suffered so immensely that she just wanted it all to stop. While many would be driven to suicide, this Mary however chose another way. One minute this Mary was here, but the next, this Mary was gone…In the blink of an eye, the decision was made and Lady Caraboo was on. Complete with the whole package! The exotic but rich clothing, the head dress, fashioned into a style that only foreign royals from a distant empire could wear. Throw in a made up language that only you…and a few dubious characters can understand, and a few unknown religious rituals and Voila! You have yourself a real princess.

The lie was so much better than the reality that she successfully manipulated a wealthy family into “saving” her. Although their affection for her was great, they displayed her for all who cared to see, as a precious painting, an expensive piece simply added to their collection for a time.

So, was the lie worth it?

What I really liked about this version of Lady Caraboo, keeping in mind that I know very little of the real one, is that her transformation was necessary for her to survive! There was no intent to deceive just a very strong will to live. It did come with its consequences though, from the disappointment and pain caused to the family who took her in to unscrupulous con artists who jumped on the bandwagon trapping her further into her lie.

Ironically, only the truth could set her free.

I like to think, that in the end Mary simply needed a break, that she needed time to gather her strength and that Lady Caraboo gave her the time she needed until she was ready to resurface again and live the life she was meant to…Well anyway, that’s my version…

Thanking Ming aka @weimingkam and Corgi Publishing for a copy of this title.