The blurb for this title does not make it justice, this is my opinion of course, but a smart pet is the equivalent of a tamagotchi in my books. I used to own one of those little guys and the novelty wore off with its batteries thankfully pretty quickly.

Let me reassure you, Jinxed is nothing like one of those little pets and throughout the read I could not help thinking that I really could do with one of those things, that it would definitely make my life easier. But is there a dark side to being connected like mother and baby without ever being able to cut the cord? If I lost you there, let me take a step into the book.

Lacey lives in Monchaville with her mother, a self-contained digital town who would rival those of Apple campus and other tech giants. Just like her father who disappeared when she was still young, she wants to have an engineering career with Moncha Corp, her future depends on it.

Lacey and her friend Zora could have a mobile phone from the tender age of 10, but they have now reached the age to be leashed to a smart pet otherwise known as a baku. They will form a strong bond with it as it is designed to be a lifelong companion besides keeping every aspect of their lives organised. From this moment on, baku and owner are to be forever linked. But Lacey isn’t ready to choose quite yet as she is awaiting the status of her Profectus application, Moncha Corp prestigious tech school. She can only afford a level 1 baku with her savings, while Profectus doesn’t allow anything under a level 3 baku in its walls, which she could get with student funding as soon as she is accepted. Unfortunately, it is not meant to be. Her rejection email is very clear. She will not be a student at Profectus and the dreams of her career at Moncha Corp just evaporates until one day she crosses path with a damaged baku, takes it home, repairs it and leashed it. And everything changes… 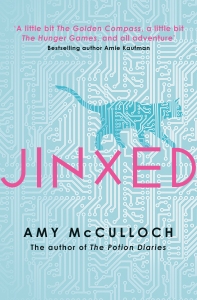 One only needs to scratch the surface to see that Jinxed is more than just an entertaining story. It raises many questions that any individual with even just a small interest in current affairs could pick on. Addiction to social media is becoming a real problem so the idea of being leashed and bond with your smart device might seem like a very scary concept, but are we that far from this happening?

The story also highlights the ever-increasing social divide between the have and the have nots, crowning tech giants as saviour of the people and that if you want to be anything in life tech is the only path. But how true is that?

Those are only a few of topics raised in Jinxed but and I could go on. But let’s not overthink it. You don’t have to delve in too deep if you don’t want to. Jinxed is a quick pace, entertaining read first and foremost deserving of every YAlit lovers’s attention.

Thanking team @hashtagreads for providing me with a copy of this title.