Dev wants things back the way they were, just like when his father was alive but he understands this cannot be and life as he knows it is now over, so the hurt lingers with no sign of easing off. Dev needs help to understand his pain. He needs help so he can be calm like his father he saw meditate so often, if only he knew how.

In his strongest hour of need Sanjay appears to Dev out of nowhere. What Dev doesn’t know yet is that Sanjay has always been there, within him and Sanjay will do everything in his power to help Dev win his internal battle over Ego. Arjun and Krishna might even help.

This is a great introduction to faith for the younger ones, with the Hindu religion as a backdrop. A real learning opportunity for anyone not familiar with the Hindu faith with a tale of battle between good and evil that can be reminiscent of other religious tales.

The illustrations are lovely and complement the story very well.

It is a short read and definitely accessible to all. 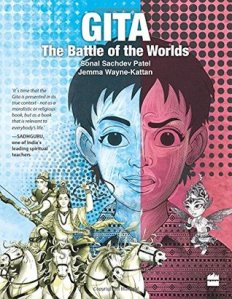